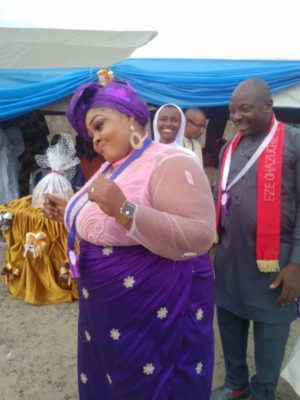 Kenneth also said that if the election is not rigged, she is sure that, if not her party, the Peoples Democratic Party, PDP, would win the Lagos State governorship seat, boasting that Agbaje would beat the APC candidate, Babajide Sanwo-Olu, and that the battled would be between her party, UPP, and PDP.

In an exclusive interview with Echonews, the UPP senatorial candidate maintained she was equally sure of her own victory if the election is free and fair.

“If APC don’t rig the election, I personally as a person not regarding the party, I will beat both APC, PDP hands down.

“Yes I will beat Yayi pulp if they don’t rig.

“I’m not starting campaign with them I will start later after a week or two with full force, don’t worry you will hear I’m not making mouth but I will shake Lagos west when I commence.

“It’s not all about how far but how well.

“Yayi has not done anything am sorry to say. He used our people and dumped them after they voted him and he assumed office.

“This time around no way for him with them. I will take it from yayi m not speaking with two sides of my mouth as an igbo, just like it happened in Amuwo, Ajeromi and Ojo.

“I have nothing to say all I want is a free fair election come 2019.

“2019 will be tough as no party or candidate will have time for teletubies. All hands will be on deck.

“Meanwhile in Lagos state, I don’t see Sanwo-Olu defeating our candidate or jimi. For governorship NMA, PSN, PCN are for Jimi, for Senate they are for me.”

Asked what strategies she was putting in place to unseat the APC candidate at the upper chamber in 2019, Kenneth said her campaign would be targeted at her kinsmen (the Igbo people) and the her Catholic Church members in the Lagos west senatorial district, adding that she would not canvass any APC fan to vote for her.

“In Oshodi-Isolo, my area is Ladipo market where I have d igbos. I don’t want to do anything with APC fans to avoid issues.

“That is why I am campaigning where I have my own people as I told you earlier. I will never ever campaign to any APC fan or folks they are not for me and never been my target.

“I gave my words to the Almighty to intervene when I won primaries to show me my own legible people, fans,folks so I don’t go wandering about because that will be failure.

“God so kind he did and I have gone back to thank him, Waiting for the real and deal day.

“For other areas still on track…for the Arewas in Lagos west are 1.5million Lagos west alone and have voters cards, their president and secretary are my colleagues, we work together till date.

Asked whether the population of her church members alone would be enough for her to win the election, Kenneth said she pegged her votes at 3 million voters with her target electorate.

“Yes because they are 99 percent Igbos and are in tradefare, Alaba, Ladipo, etc. Tradefare alone I sit as their Doctor in their clinic. They have just one hospital in tradefair and I am in charge. All their presidents and chairmen of the markets and associations are waiting for Feb 2019, likewise Alaba.