I sing to inspire my listeners – Olamide 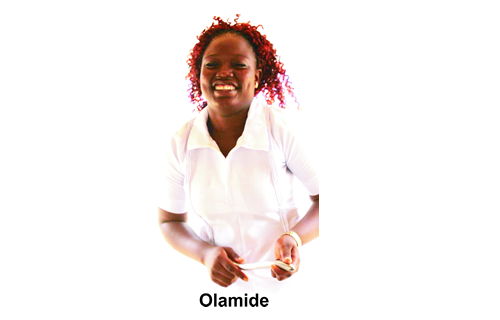 Shokunbi Olamide is an upcoming Ejigbo based RnB artiste. In this interview with ECHONEWS, she said the main message of her music is to inspire the listeners, saying she sings as ASA because she loves her songs. She also talked about her plans for a musical career, her education and her targets. Excerpts:

Who is Shokunbi Olamide?
My name is Shokunbi Olamide but my stage name is Lamishow. Actually I have always loved to sing. I sing in school and among friends in church but I have never seen music as a career. But December 15, 2017 was when I actually noticed that I might have to take music as a career. I was outside my house just rehearsing with my friends on a normal ground because we played with keyboard, guitar and the rest. We were busy just playing but it was late at night around 12:30am. In the morning, Mr. Shola who is staying near my house and owns a studio said he heard my voice and told one of his guys to come and call me and asked me whether I sing. I said I only sing for fun. He further asked whether I had any song and I said “Yes I do” then he told me to bring them. Since then, I have been taking my songs to him. He would go through them and if there are some things I needed to change he would help me with it and since then have been singing and recording my songs.

You sing just like ASA, why?
Actually I have always loved Asa as an artiste and her music. I listen to her a lot so I can say probably because I listen to her song all the time. I really like the way she sings may be that is why we sound alike.

What kind of music will you term your song?
I call it RnB because it is always calm.

How many singles have you dropped so far?
I haven’t dropped any single yet but I have readymade songs that have been recorded, mixed and mastered but they are yet to be released.

Can you tell us about your education?
I attended Imakiyo Model Primary School, Ejigbo, White House College at Akogun, Ejigbo for my secondary school. After my secondary school examination I proceed by getting myself trained as an auxiliary nurse. I trained at God’s Care Medical Center at Canoe Express Road where I trained for three years. I have been working as an auxiliary nurse since then.

How do you plan to make yourself known to the world concerning your musical career?
Actually I work with Mr. Shola Ojewusi, he is more like my manager. We have been making plans for things especially for this December, there are lots of shows and he has been trying to make sure I perform at some of the shows. We are also trying to make sure some of my songs are dropped even if it is just only one or two.

What message do you pass across with your songs?
I can say my kind of music is the kind of music that you have to sit down, listen to and be inspired. It mostly has to do with the lyrics. I think there are lots of people who listen to good music here in Nigeria though I haven’t dropped any singles.

Do you make use of social media to promote your songs?
Actually I remixed songs. Recently I did Ponmile by Reminisce, I did a version of my own. It’s just a minute song so I usually do this and post them on Instagram.

What message would you pass to the younger ones who also love to make their career in music?
If you have a dream, work towards it, make sure your dream comes through. There is a saying that there is power in your dream. If you can get to dream try to make your dream come through, keep on doing your thing one day it will come through.

What are the lined up activities you have from now till December?
Actually I love to perform at Ovation Carroll this December; it’s a big platform where I will like to perform. I’m also planning to release two singles. I actually did a song titled “I’m Proud” talking about African women, how proud they are and another music titled ‘Home’ that talks about Nigeria.