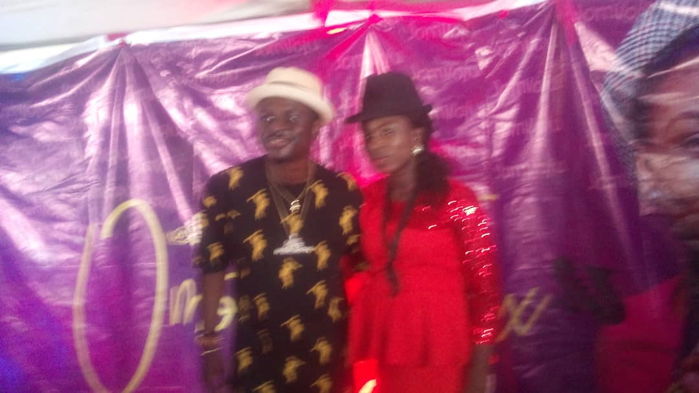 Kehinde Petter Otolorin popularly known as Kenny Blaq, a foremost Nigerian stand-up comedian and Omotola Sax, an Ejigbo born Saxophonist and gospel artiste over the weekend thrilled the residents of Ejigbo and other guests to the highest level of fun at Ejigbo Mini Stadium.

During the concert tagged “Omotola Sax 2019 Alabaster Concert” annually oganised by Omotola, the two artists rendered great performances as Kenny Blaq, with his usual music comedy, forced out laughter in the guests while Omotola Sax gave a rendition of her creatively composed songs with her saxophone.

Omotola made a public appearance when she launched her maiden album titled “Jomiloju” in July 2019 which is made up of three songs as she gears up to take her music career a notch higher.

The first-timer recording artiste has been a performing artiste for over 10 years but has decided with her management to give her fans a piece of her original works.

The songs in the EP are Our God, Binabanjo and Jomiloju which is the title of the EP.

Omotola Sax is a psalmist and instrumentalist. She is the convener of the Alabaster concert; a yearly gospel music event.

The concert started in 2010 and holds at the Ejigbo mini stadium every year.

READ ALSO:  Bobrisky lied to his father about his changed identity - Olowu

The 2019 concert started with the gospel ministration tagged “Raising the Banner”, the title of tge concert, was given as appreciation ,praise, acknowledgment and worship of the most high God.

Bola Zion, a female gospel artiste and her male counterpart, Bola Bee also thrilled the audience with rendition of their special music which arouse and caught the attention of the guests.

Other artiste who featured on the programme is Mr. Telemi with his C&S gospel praise.