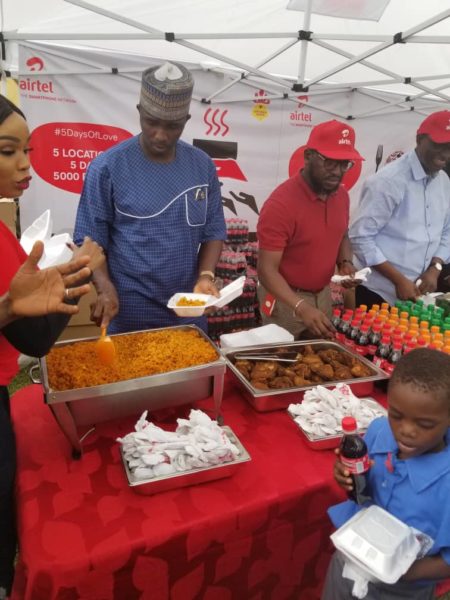 Oshodi-Isolo Local Government has appealed to the Airtel Nigeria for support on rehabilitation of schools and Primary Healthcare Centres (PHCs) in the community as part of the company’s Corporate Social Responsibility (CSR).

The appeal was made by the LG Chairman, Hon. Bolaji Muse Ariyoh during the a programme organised Airtel in conjunction with the Local Government which was tagged “Five Days of Love”.

The Chief Executive Officer (CEO), Airtel Nigeria, Mr. Segun Ogunsanya explained that the programme served as an avenue for the communication company to show love and goodness to numerous of his customers and Nigerians at large which is set the tone for Christmas.

He said the policy has been consistent for over five years organized across the country.

According to him, Airtel Nigeria is known for its numerous humanitarian gesture of showing love and support for the people with different schemes under his corporate social responsibility (CRS) of giving back to the society in which education is also included.

He acknowledged the massive turnout of the people which is an unprecedented in the journey of Airtel love.

The Council Chairman, Hon. Idris Bolaji Muse Ariyoh appreciated Airtel Nigeria for coming to Oshodi community and making the people benefit from the kind gesture of the organisation in a showing of love with the setting of the tune for the yuletide season.

He said the uniqueness of  Oshodi lies with its strategic location as the heartbeat and economic nerve centre of the state coupled with his population strength as over 3 million transact business in the local government on daily basis.

He posited further that away from the wrong assertion or notion people are having about the local government that his people are unique, law-abiding and very accommodating which makes the community be the best place for business operation.

The passion of the council chairman for the betterment of his community was again restated as the medium was used to solicit assistance from the Airtel in the rehabilitation of school in Oshodi as part of corporate social responsibility which is a core value of the company.

The event witnessed the registration of sim cards, giving items to people with free food and drink for all.

The well-attended event had the presence of the lawmakers, supervisory councilors, CDC, Market association, Artisans, Students, and others.