I want to take the youths off violence with sports – Oloke

Fatai Tijani popularly known as Oloke, the CEO of Oloke FC, in this interview told Saheed Afolabi the reasons why he sponsored grassroots sport competitions and his love for football. He also spoke about his education. Excerpts:

My name is Fatai Tijani from Ifelodun Local Government in Kwara State but I was born and bred in Ofin Street, Lagos Island in Lagos State. I am popularly known as Oloke. Presently I reside in Oshodi.

What prompted you to sponsor grassroots sport competitions?

First of all, it’s what I love doing and it’s what I love to see people doing. I love football so much that when I was in secondary school I played for my school team and if I was told that I wouldn’t play for a major club in Europe and the Nigerian national team, I would say it’s a lie because I devoted so much of time to the beautiful game of football when I was much younger but God knows best.

I started sponsoring grassroots competition by first owning a club with the help of a coach named Duru, who helped me in scouting for the best legs to represent Oloke FC in the maiden edition of the CY Unity Cup eight years ago. My team was able to reach the semi final of the competition when we lost to Jogo FC with a lone goal. Then I restructured the team which led me to employ Samuel Oladele as the team manager of Oloke FC. Oladele had some boys he did train at Owoseni Primary School so I approached him to be my team manager and promise to finance the club since God blessed me with money. 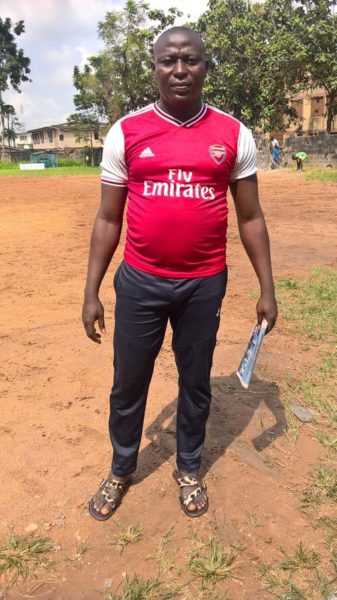 Since then, I have been investing in grassroots sports running into millions of naira and I have never looked back despite my little pay in an Indian company and money generated from my company Frajan Limited. Though it is not easy as I did menial jobs to get to the top but God has been by my side. I also have a large family to feed. Though I love sports, it is my prayer that my club players sign for European club so that I can also benefit from football. Taking the youths off violence, drugs and illicit ways is also one of the reasons why we sponsor competitions to engage them.

How many competitions has Oloke FC won?

Yeah, the first competition that my team won was in far away Sagamu in Ogun State. We were invited for the competition when they heard that we were a good team in Oshodi. So, we rented an apartment for the team and provided them all what they needed for the duration of the competition and thank God we won the competition and we have won five trophies so far at Oloke FC. We hope to win the CY Cup competition because that is the trophy we wish to win next after coming close by reaching the final twice and losing them.

Numerous people have heard about your attitude in touching the lives of people around you and far from you, are you vying for any political post in the nearest future?

I don’t like politics. In fact, I have only voted once and it’s for President Muhammadu Buhari in 2015. I don’t see myself in politics. I just want to live my life without any worries because I believe politics is a dirty game.

Who is your role model?

My father is my role model although he doesn’t like football but for what he taught me in life about how a man can stand on his feet and how a man can be of help to the needy in the society. I remember when I was a kid, there was a day that my father gave his last money to someone who was in need of money. I got angry that I asked my father why he did that. He told me that we still had enough food to feed on at home that the person who came in didn’t have any. So, I learnt a lot that day from him. Since then, I have always had it at the back of my mind to always help the needy. On behalf of Oloke FC I would want to show our sincere appreciation to ECHONEWS for providing us free media coverage and we would also look into supporting ECHONEWS by giving them adverts soon.

What is your educational background?

I am a secondary school certificate holder (O’level).

What is the name of your favourite foreign club?

My favourite football club is Arsenal FC of England and I have been supporting Arsenal for over fifteen years. The reason why I love Arsenal is because of its flair and attack minded play which brings joy to my heart and also the faith Arsenal puts in young players.

What are your hobbies?

I love playing football. I love boxing. I love helping the needy because I learnt it from my Dad and I also love my job (laughs) because without my job nobody will know or love Oloke.

What is your favourite food?

Haa, it is eba o, eba is my favourite food any day, ask my son (pointing to his son) he knows I love eba with any good soup. I’m ready to eat (laughs) and I can eat it three times a day but my son doesn’t like eba.