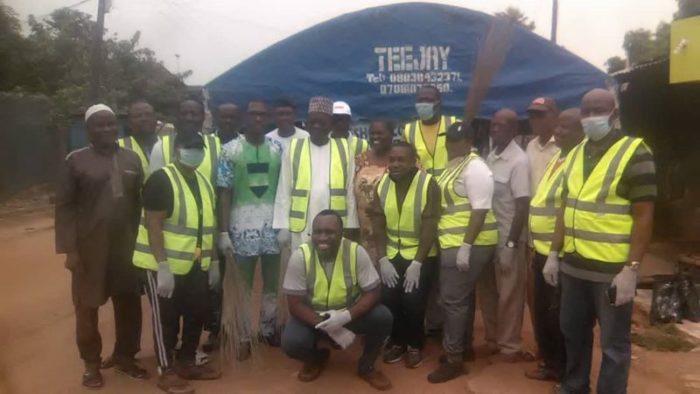 In a bid to keep the environment safe from the spread of diseases, Leshomi Community Development Association (CDA) has embarked on weekly sanitation in the community.

The exercise tagged: “Clean up our Environment” which started on Saturday, March 7 is to be held every Saturday through the month of March between 8am and 12noon.

The exercise include carting away refuses scattered across the streets, desilting of gutters and sweeping. The CDA coversstreets such as  Leshomi and Atanda and Edun, Adenike, Sakaraji, Adegboro, Ayorinde and Club roads.

Commending the effort which was described as a right move by the community, an official of the department of Agriculture and Community Development,, Oshodi lsolo Local Government, Mr. Senami Akinlolu urged other communities to emulate the gesture as he appealed to the community members to assist the Community Development Committee (CDC) chairman, Alhaji Adisa Olawoyin.

Olawoyin also applauded Leshomi CDA for the good example it has set which he said served as a challenge to other CDAs including his own CDA (Shogunle).

Leshomi CDA chairman, Ferreira Marcus Idowu stated that the exercise marked the beginning of their plans for the health and safety of the community.

He warned community members to desist from littering the community with refuse, advising them to get waste bins and to pay up waste bills regularly to avoid dirty environment.

The chairperson of the neighbouring CDA (Akinsoji), Princess Adenike Dosunmo commended the exercise and promised to replicate it in her CDA.