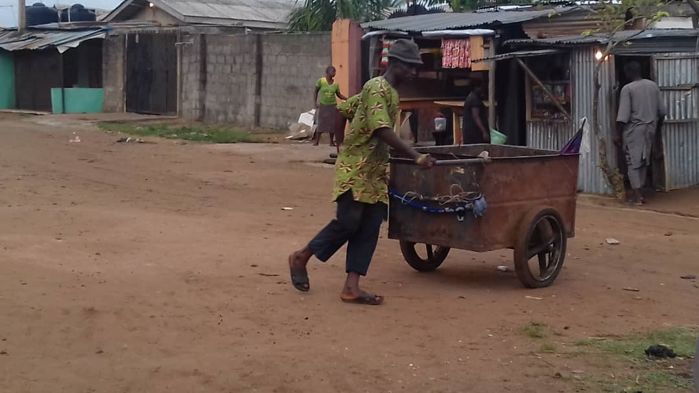 Patronage of cart pushers has been on increase in Ejigbo as residents continue to demand for their service in waste disposal since the Private Sector Participants (PSPs) charged with the duty of waste removal and management have not been seen to pick the waste.

Some of the residents who spoke to ECHONEWs said they have to patronise the cart pushers since the PSPs were no more coming to cart away their refuse especially during the lockdown crisis.

Our correspondent who went round the community noticed that there were heaps of refuse abandoned in different locations across the community.

It was gathered that the refuse was dumped unattended to due to the failure of the PSPs to do their job in the community.

To this effect, residents have resorted to patronising the cart pushers to dispose their accumulated wastes.

Meanwhile, it was gathered that after collecting the wastes from the neighbourhoods, the cart pushers dump them at a dump site located around Ori-Oke, Ona-Iwamimo area of the community.

A resident, Mrs. Balikis Muraino, who happens to be a landlady and retired medical doctor living at Fatusi Street, told ECHONEWS that though PSPs have been going to other places, they were not seen in her community since the partial lockdown relaxation started.

The retired medical doctor explained that many of them have to patronise the cart pusher to avoid dirty environment though they knew that the cart pushers had been banned by the government.

She noted that the cart pushers still operated in some parts of the local council area.

“The absence of the PSPs has made us collaborate with the local cart pushers and refuse packer to help us as alternative as this decayed and smelling trash can cause diseases such as cholera, a disease from infected water that causes diarrhea, which often causes death especially during the raining season,” she said.

Speaking with ECHONEWS, one of the scavengers, Muhammadu Gasali, said though the lockdown has affected everybody, they still make living by carting away the refuse.

He said: “During the last one month, the lockdown has made things that are abnormal to be normal in the sense that people keep using and piling up trash, dirty and unused items in the community without disposing them. But we take the opportunity to make the little money we can especially now that people need us most.”

Another cart pusher, Ibrahim Kishmir disclosed that some of them had to go back to cart pushing after they had diversified their business to shoe mending when the residents who had earlier been patronising them started calling them to come and pick their refuses.

He added that many of them who had even went into fruit trading during the fasting period had to go back to cart pushing business in the morning and did other business in the evening.

However, all efforts to contact the PSPs operating in Ejigbo proved abortive till the time of filing this story for publication.