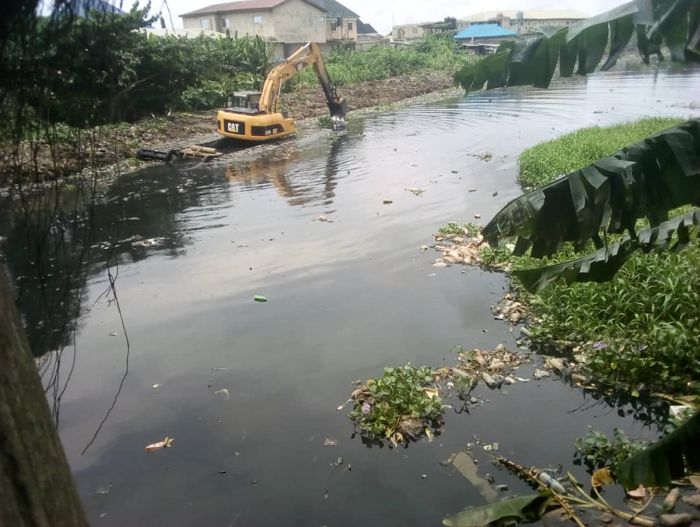 The ongoing dredging of Oke-Afa bridge canal by the state government.

In response to the yearnings of the residents for dredging of the canal for free flow of flood, the Lagos State Ministry of Environment Is dredging the Canoe-Oke Afa Bridge canal, Ejigbo to avoid flood during this year’s rainy season.

The canal has been left un-dredged for many years while the efforts of the communities around the areas to get government’s attention had been fruitless.

However, the state government has finally responded and dredging has begun.

One of the engineers of Fastlink Construction LTD, the contractor handling the project,  who was operating the caterpillar at Oke-Afa Bridge canal said the extent of dredging could not be ascertained, saying where they meet with the other caterpillar working from the other side would determine where they could cover.

Asked whether the dredging was in preparation for water transportation, the engineer said the dredging is mainly to avoid flooding in the community and to ensure free flowing of water in the canal.

Praising the government for dredging  Egbe stream, which links Ori-Oke-Ifelodun CDA, thé chairman, Alhaji Sanni Tajudeen (Labule), said the dredging of the canal by the state government  was timely as it was done at the beginning of the rainy season.

He recalled that the canal was last dredged by the local government during the administration of Hon. Kehinde Bamigbetan as the council chairman.

He said the dredging would really reduce flood in the community as the canal is now very wide to hold more water coming from the community during the rainy season.

He stressed that the CDA would embark on project to channel some of the drains in the community which were not linked to the canal initially to be linked up so as to have free flow of flood.