My dream is to play for Super Eagles of Nigeria – Oladimeji 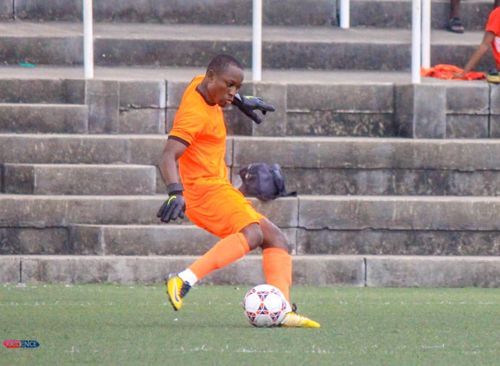 In this interview, the goalkeeper of Ysdron FC Wasiu Oladimeji told Saheed Afolabi about how he began his football career and his failed deals with Enyimba Football Club of Aba and Heartland Stars of Owerri. Excerpts:

Tell us about yourself?
My name is Wasiu Oladimeji, I presently play for Ysdron FC of Isolo. I started my career at Samy Academy at a tender age of 10 and I have been with Ysdron FC for over seven years.
You have been at Ysdron FC for over seven years, what have you gained from Ysdron FC?
Well, actually I have gained a lot from Ysdron FC, all thanks to my late coach, Olu Olohunyomi who did his best to improve my goalkeeping skills. Coach Olu, as we used to call him, made sure I was always at my best.

What are your aspirations in life as a goalkeeper?
It is the dream of every footballer at the grassroots to seek greener pastures outside the country so, I think that’s what I’m actually thinking of and if possible I will represent Nigeria at the national team level which is also a dream for me. I will make my family and friends proud.

What are you working on presently?
I’m working on my fitness right now. Because of the lockdown, we are not able to train as a team because you can never say when the offer will come and I don’t want to be caught unaware. Also, I am talking with my agents and managers to help me get lucrative offers outside the country.

Have you ever played for a Nigerian league?
Oh yes, I played for the Academy of Enyimba Football Club of Aba and Heartland Stars of Owerri for three years in total. Unfortunately, I was not able to secure a professional contract because my manager who took me there said the terms and conditions of the contract were not favorable. I also went to Ghana briefly but returned back to Nigeria after unsuccessful adventure in football.