CDA to partner with PSP on waste management 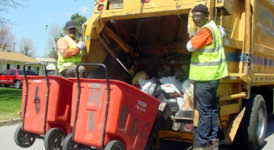 In an attempt to have a cleaner environment and good waste management in the community as rainy season commences, Oboye-Pipeline Community Development Association (CDA) has moved to engage the service of Private Sector Participant (PSP) in the community.

To facilitate good working relationship, the CDA informed that it is awaiting its response to be intimated with the modalities of its service.

The CDA Secretary, Comr. Nasir Sambakiu, explained that part of the CDA agenda is to get PSP operations in their community having persuaded and warned the residents against burning waste in the community, the act which he said is dangerous as petrol pipeline is laid across the community.

He said the association has contacted the PSP company to have a stakeholders’ meeting with the community which was scheduled for last week.

According to him, the community would commence patronising the PSP as soon as they both agree on mode of operation, informing that the residents are eager to key into more regulated waste management in the community.

Meanwhile, while awaiting the partnership agreement with the PSP, Nasir admonished the residents to do away with indiscriminate waste disposal and stop putting wastes in the flood in order not to block the drains which may subsequently affect the community.