Kashimawo Alimi Road to be ready in 3 weeks 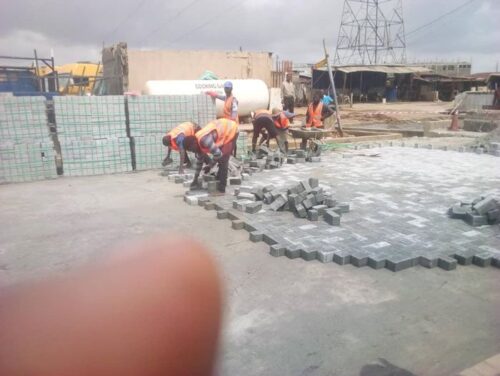 The Kashimawo Alimi Road which is under construction by the Ejigbo Local Council Development Area (LCDA) has reached the final stage and may be ready in the next three weeks.

As the construction company commenced laying of interlocks to complete the project, the council’s Supervisor for Works, Engr. Ayotunde Ojo, said he was satisfied with the level and standard of the work so far done on the road.

According to him, the company has used the prescribed standard materials signed in their terms of agreement.

The site engineer of Combination One Limited, the company in charge of the construction, Engr. Babatunde Ige, told ECHONEWS that it would not take the company more than three more weeks to complete the project if the weather is friendly, saying the project is already at the final stage as they have started laying the interlocks.

He explained that the road was constructed with good standard with drainage channel and interlocking stones.

He said the project would have been delivered earlier but was hindered by the lockdown, explaining that its workers just resumed a month ago.

He then assured that all kinds of vehicles could ply the road when completed based on the standard at which the road was constructed with drainages on both sides.

Engr. Ige commended the council chairman for making the road construction easy for them with his full support in term of funding.

He also appreciated the host communities for their co-operation and support.

He however urged the council authority to sensitise the people in the community on proper waste disposal so as to stop dumping wastes into the drainage to maintain the road.

He explained that to maintain the road the drainage channel must be kept free from blockage so as to flow water off the road.